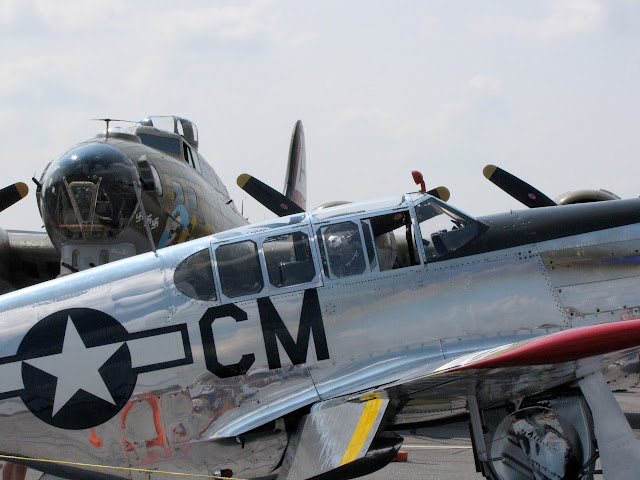 P-51 C Mustang Fighter
---------------------------------------
Today we were off to the Community Days at the Lancaster Airport where the public is invited to the tour the airport facilities and learn a little about aviation history. The main attraction of the event were the two World War II era bombers and other vintage military planes on display from the time period. We only live about a mile from the airport and the planes were buzzing overhead following their arrival a few days earlier. They make such a distinctive sound, so different from modern aircraft; you can't help but take notice. A great advertisement method to say the least! 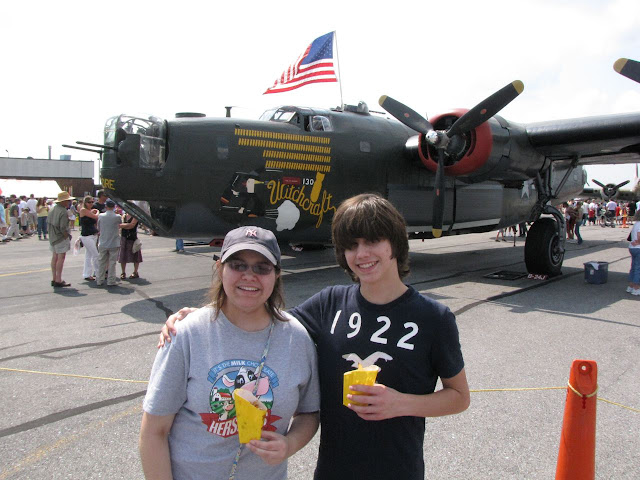 Flying Fortress
------------------------
I grabbed the kids (by force) for a little afternoon adventure to take in the action up close, right from the runway. The place was packed and traffic was at a standstill. It had rained the previous two days canceling a lot of the scheduled action. All the big performances were now pushed to the final day, so the crowds were descending on the airport like hippies heading for Woodstock. We eventually made it to a muddy field where an ocean of vehicles were parked in a make-shift parking lot. We hiked the quarter of a mile to the air show entrance and the first thing you come to is the food court. The kids had not eaten lunch yet and the smell of fair like foods, wafting over the grounds, were a great incentive to push onward! 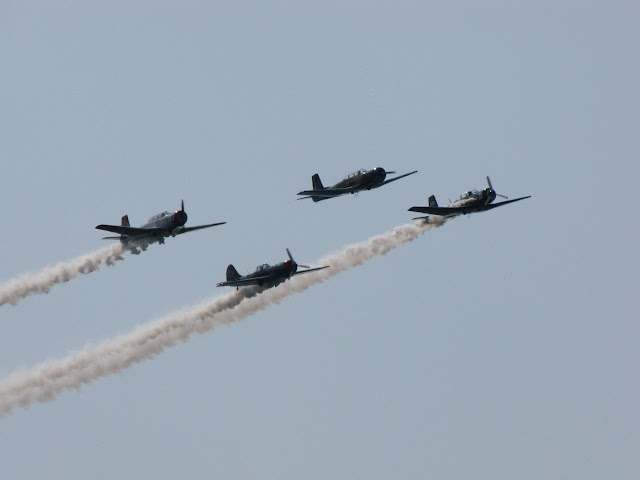 World War II Fighters
---------------------------------
The stars of the show were grounded today on the runway, open for walk through tours of the interiors. The B-24 Liberator bomber (All American) remains alone as the only flyable aircraft of its kind in the world. The B-17 Flying Fortress bomber (Nine on Nine) flew 140 missions during the war and never lost a single crew member. I found out quickly that getting close up to aviation history can be expensive as it was $12 to tour each plane per person. They planes are big but not big enough to spend the money for the three of us to check both out, so we decided to just admire the exterior from behind the perimeter barricade for free! On the previous days, you could actually go for a ride in one of the bombers for $425 an hour or ride along in the cockpit of a P-51 C Mustang for $3,200! Apparently, the price gets bigger as the size of the plane gets smaller. 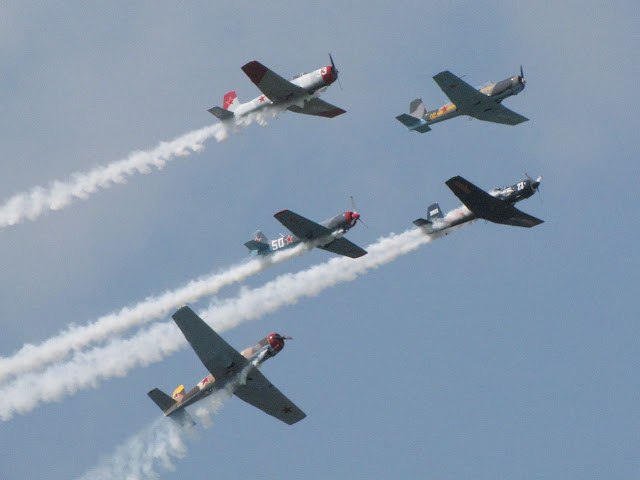 One thing became apparent very quickly, in that there is no shade on a runway! The sun was hot from above and the asphalt baked from below making it a little uncomfortable. The kids fresh cut French fry effect was wearing off and they were looking less interested by the second. Nothing much was happening for quite a while but suddenly the sun went behind the clouds offering a brief reprieve from the heat and then the planes appeared on the horizon and the air show began. The squadron of five vintage planes went through a dazzling routine of acrobatic moves including, loops, barrel rolls, and inverted flybys. The absence of the sun allowed for much easier viewing of the action and helped enable my camera to capture some nice images from their routines. 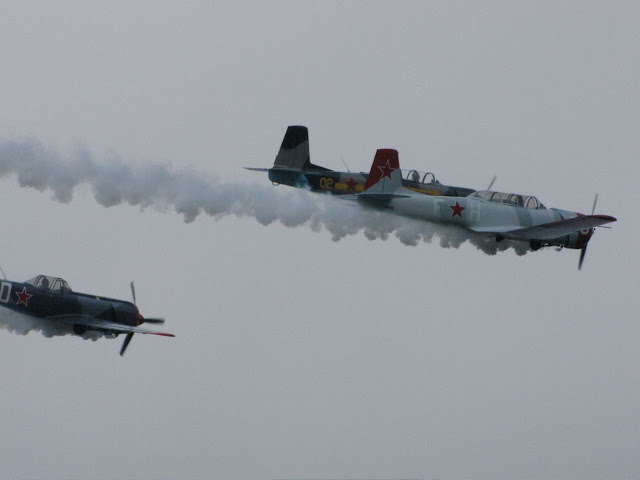 Laying a Smoke Trail
-------------------------------------
A few of the planes trailed a line of white smoke that outlined their flight path for effect. I always wondered what that stuff was because during the war, it would indicate they had been hit and were on their way to a crash landing! The smoke is actually generated by something called fog oil that is sprayed in a fine mist into the hot air created by the exhaust of the aircraft. The effect has been around since the end of the war and has been used in varying forms ever since. The show was great but the sun broke from its ray blocking cloud prison to resume the assault on the spectators below. The kids looked like they had just completed a sortie mission in the Pacific theater and I knew it was time to bale out! 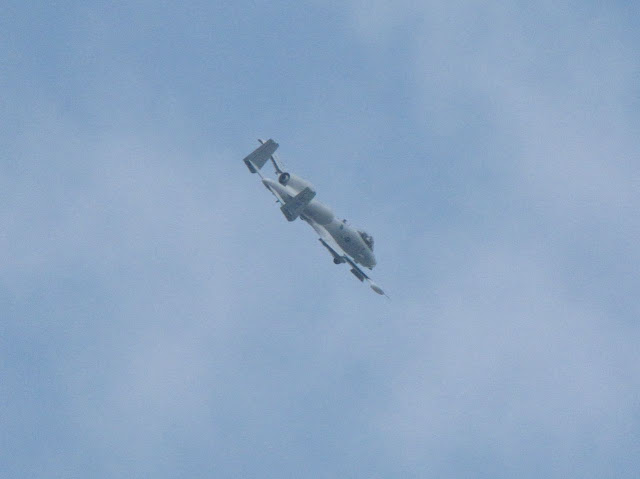 A-110 Tank Killer
--------------------------------
I was a little disappointed because the modern military planes looked like they might jump into the show and I really wanted to see the aerobatics of modern technology. We drove home the back way rounding the end of the runway and saw one of the A-10 Thunderbolt II aircraft take flight. We pulled the car into a field and ejected outside to see the jet put on a roller coaster display of maneuvers. The A-110 is often called the Tank Killer due to its successful assault ratio on enemy targets on the ground while supporting infantry troops. It is also referred to as the Warthog due to the aircraft's unrefined and bulky design. 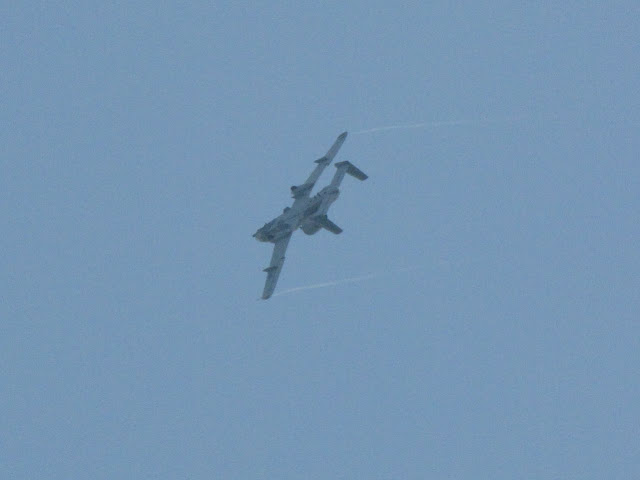 Inverted Warthog
-----------------------------
The A-10 Thunderbolt can carry a variety of disposable explosive payloads but the primary weapon of the aircraft is the enormous 30mm Avenger Gatling style cannon machine gun that can fire up to 4,200 large armor piercing rounds per minute which translates to 65 bullets per second. The weapon is mounted directly below the pilot under the nose of the plane and has a high target rate of 80% accuracy. The plane was amazing and it is easy to see why the country that dominates and controls the sky, has a huge advantage during conflict. It was a really great experience for the kids despite their dehydration and signs of early heat stoke. 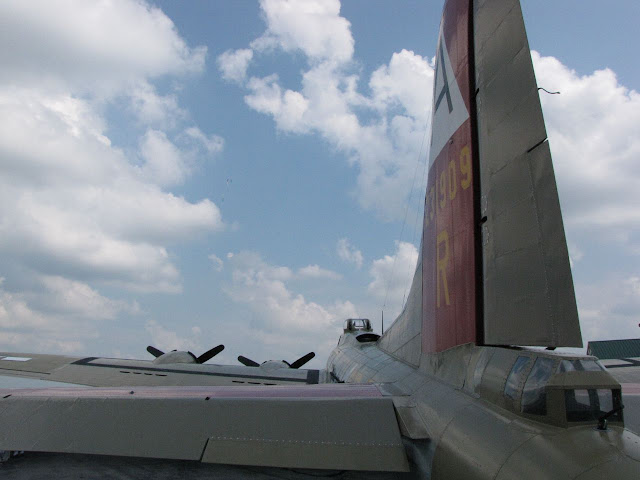 World War II Bomber
---------------------------------
The theme of the show was Freedom Isn't Free and I am always humbled by the personal risk and sacrifice young men and women gave then and now to protect us from harm and threat, the world over. A big thank you to veterans and their families! I truly appreciate you and all you do for our great nation. 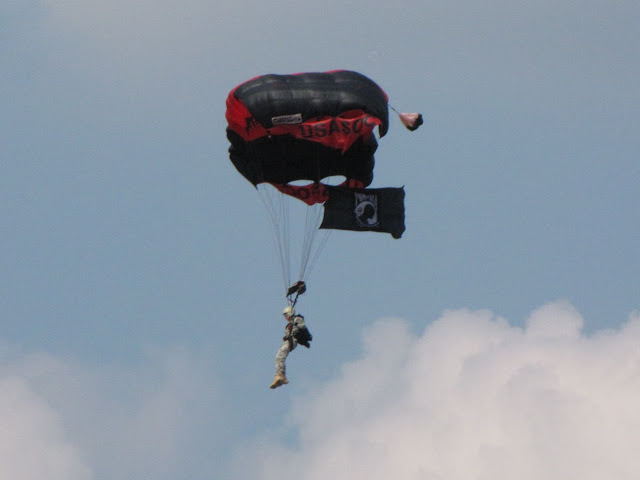 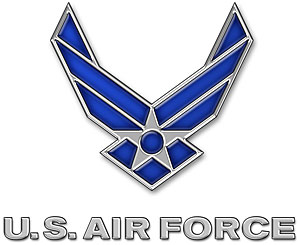