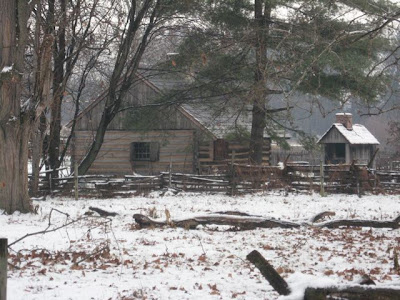 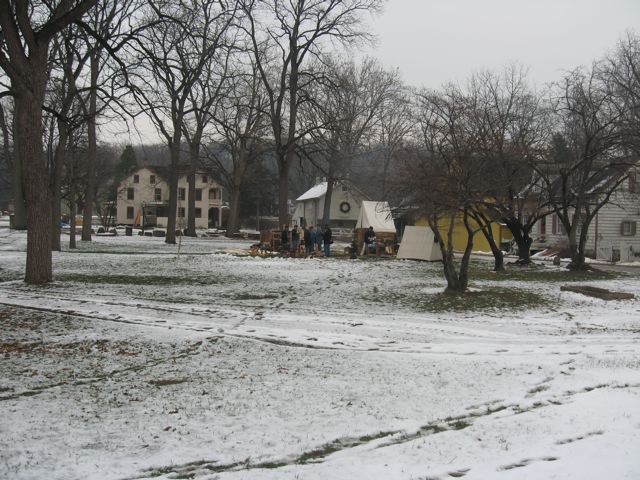 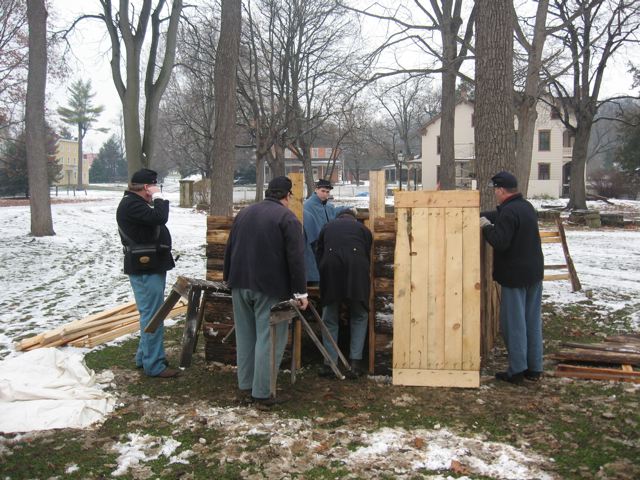 Winter Hut Construction
-----------------------------------------------------
Soldiers were given the task of building their own huts in small groups from whatever materials easily came to hand.  Much like Washington's soldiers at Valley Forge about a century earlier, the men worked to create neatly organized streets of winter quarters.  The log cabin like structure was topped by an A- frame tent for a roof that helped give the appearance of uniformity and continuity through the parallel streets.  For the first time of the year, the added height of the tent ceiling permitted soldiers the luxury of standing up more comfortably inside their shelter. 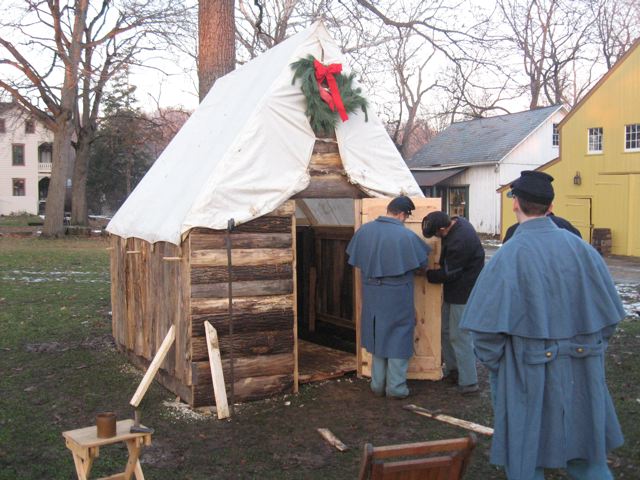 Finishing Touches
-----------------------------------------------------
We have two example huts as part of our living history encampment.  The first is smaller for about two to four people who had previously been shelter-half tent mates in the field.  The one being constructed above was for a larger group of four to eight men.  Sometimes shelter huts occupied more men than would fit within the walls.  This was possible because the soldiers were all assigned to various camp patrols and duties with staggered shifts. As a result, the men of a hut were rarely all off duty at the same time of day or night to occupy the shelter.  Regardless, few if any soldiers had much privacy.  The last thing added to our winter hut was the door, which in this particular structure was attached with triangular shaped pieces of thick leather resembling makeshift hinges. An actual hut in the 1860's would then be caulked with mud or clay inserted between any gaps to seal open spaces from the frigid winter winds. 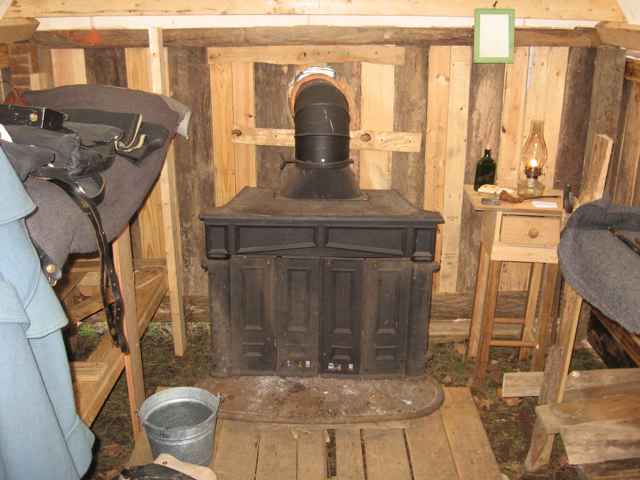 Cast Iron Warmth
-----------------------------------------------------
Inside our completed hut a cast iron stove was added for comfort.  Most Union huts had a chimney so a fire placed inside could keep out the winter chill.   A wooden floor would keep the men's feet dry and prevent mud from forming at their feet.  Four men would occupy this hut with two sets of bunk beds to maximize the efficiency of their space.  Beds built off the ground created warmer sleeping quarters.  Some of our guys slept inside during the night but since I was so close to home (wimp) and my wife and kids would miss me (exaggeration) I decided to go home for the night to modern heating and the comforts of home!  So I will admit it... I went AWOL... but I was back, just in time for breakfast! Don't tell my sergeant!  (He went home too)  Modern Civil War era soldiers have the beneficial option of commuting to the war. 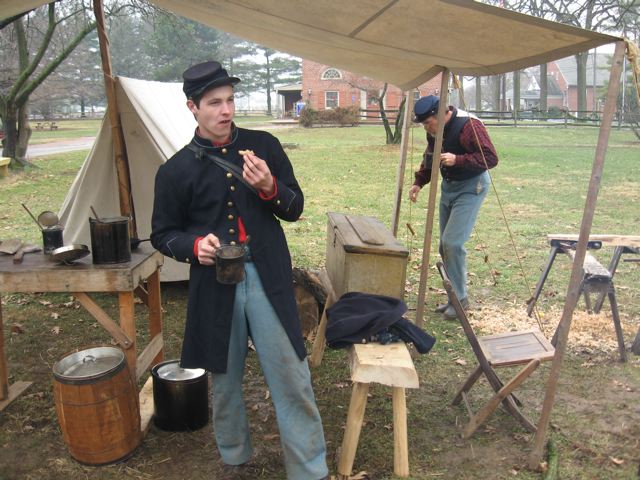 Round About Camp
-----------------------------------------------------
Winter was spent repairing gear, writing letters home, and going about the daily routines of camp life.  The men took shifts working various posts including guard duty, foraging parties, cooking, gathering wood, etc...  The men enjoyed taking a break from regularly issued rations of hard tack biscuits, dried beans, and salt pork during their stay in more permanent camps.  They could now take advantage of local food supplies and items offered by local towns trade centers.  The Union army was also followed by groups of migrating sutlers that sold a variety of scarce items to soldiers that were in demand at inflated prices. Deprived solders were tempted by goods and sutlers were all too happy to help them part with their monthly pay of thirteen dollars a month. 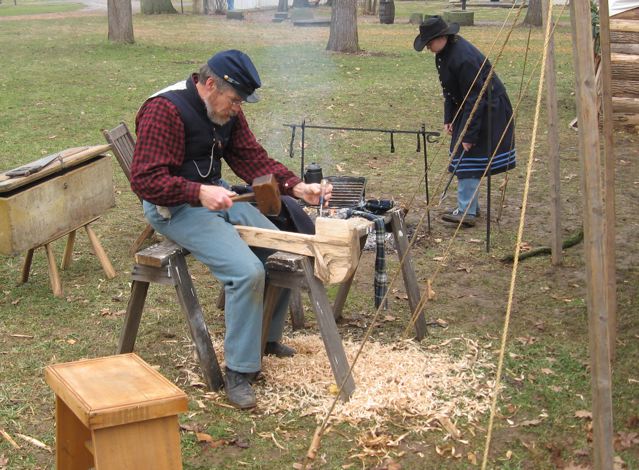 Soldiers become Craftsmen
-----------------------------------------------------
During winter camp, soldiers could use their hands to craft items that would make life more comfortable.  Above a soldier creates a workbench that was later used to create stools, tables, benches, and other practical pieces of crude furniture the unit could use about camp. Some men with useful skills might be selected to take up their civilian trades on site repairing clothing, shoes, and leather items.  The routine of military life was soon established in the camps with regular schedules established to maintain camp discipline and order. 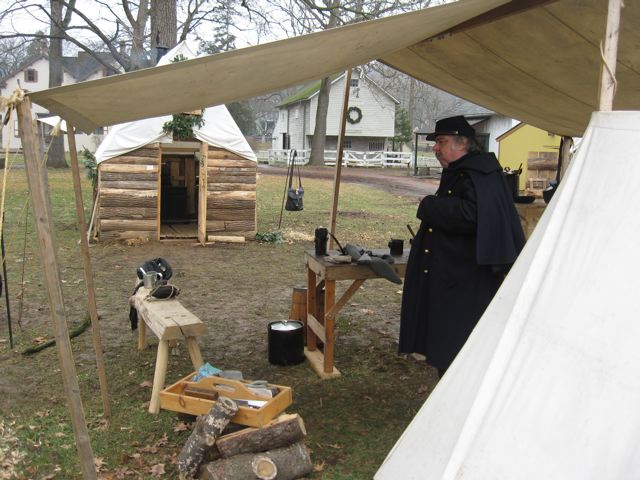 The Invisible Enemy in Camp
-----------------------------------------------------
Camp life was always a dangerous place for the combination of common childhood diseases that collectively were referred to as camp fever.  More men died in camp from disease than from enemy battle wounds.  Germs had not yet been discovered and even simple wounds could quickly become infected.  Many men came from isolated rural areas and with low levels of immunity they were suddenly exposed to dangerous bacteria sources within the tent cities.  With the men quartered so closely together, sickness could quickly spread through the crowded camps.  Contaminated common water sources caused diphtheria, dysentery, and cholera, which were common life threatening illnesses.  The Sanitary Commission was later developed to help educate Union soldiers on the importance of good personal hygiene and worked to improve the level of good health within the camps. 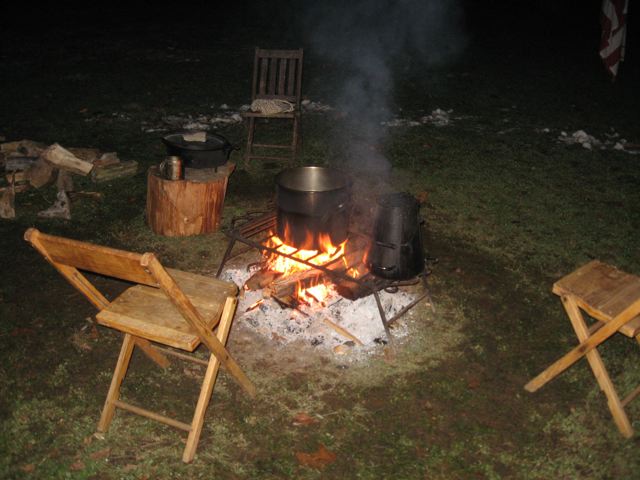 Soldier's Stew on the Fire

-----------------------------------------------------
Eating is always an adventure when you are suddenly back in the 1860's for mealtime.  A lot of thought and preparation goes into planning meals when we have an encampment.  Most of the work in done by our very capable authentic company cook Bruce.  For lunch we had chicken and rice soup with homemade biscuits and baked apples with brown sugar and cinnamon for desert.  For our evening fare, we had a stew of cubed beef with a variety of fresh vegetables. We have already butchered a live chicken, roasted a turkey, and once even had grilled squirrel that someone had killed while on a previous hunting trip.  People always ask me what squirrel tastes like and my reply is... I have no idea!  Even though I ate it, I learned a valuable lesson... if you grill any kind of meat long enough it doesn't taste like much of anything except charcoal.  Protein nonetheless!  Surprisingly, there was a lot of leftover squirrel at the end of our meal? 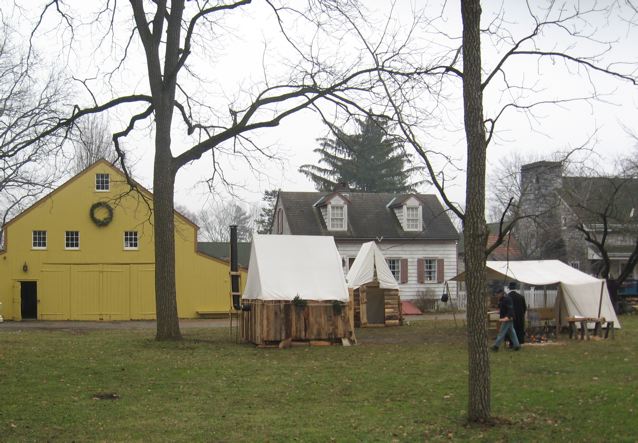 The Arrival of Spring
-----------------------------------------------------
As the chill of winter began to give way to spring, the men began to abandon their filthy huts for the outdoors.  They would remove the canvas roofs of the huts to create tents once again. Camping out in the open again in the fresh air was a pleasant contrast to the crowded and dark conditions of the huts.  The huts were slowly disassembled and recycled as handy firewood for their cook fires.  The warmer weather of spring also brought back the winds of war and the need to go back on campaign in search of the enemy.  Most remains of the winter camps would be plowed under and sown with seed causing evidence of their existence to disappear with the growth of crops. Today, archeologists are unearthing newly found artifacts by rediscovering the locations of the winter camps of both armies in rural areas where they still remain hidden, buried from view. 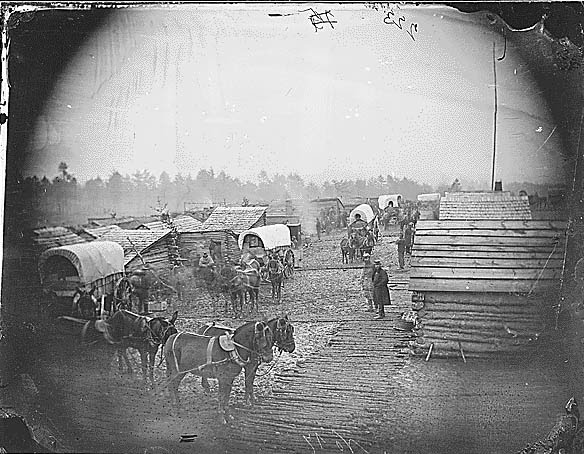