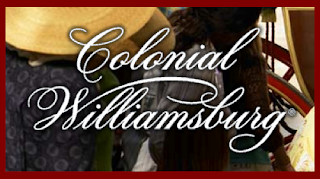 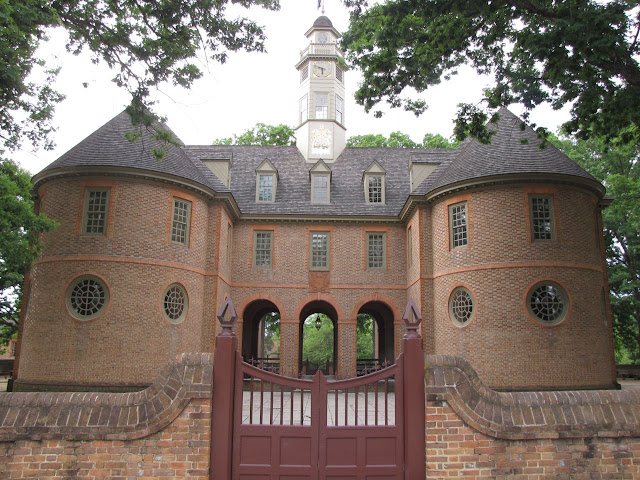 Welcome to Law and Order, Colonial Williamsburg style... the highest court in Virginia. Following the colonial governments move to Williamsburg, a government building needed to be built where the legislature could meet and conduct business. The structure created was in the shape of an "H"; actually two separate buildings connected together. The east wing was reserved for the House of Burgesses and the west for the judicial business of the general court. The second floor provided space for the governor and his 12 council members, who were collectively known as the Council Chamber, to make key decisions for the colony. This was the first building in America that was actually called the capitol. 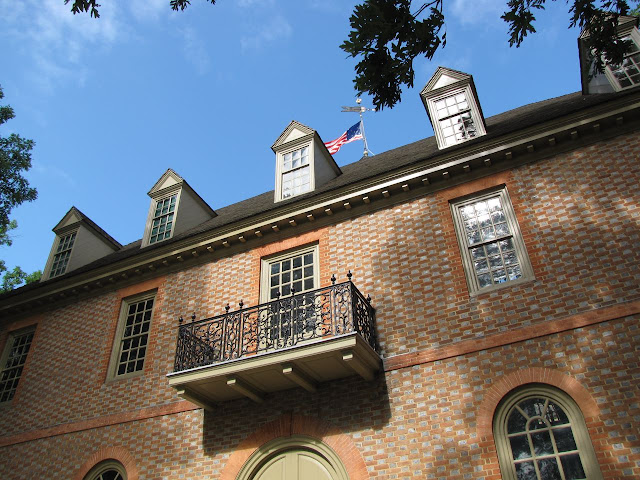 Governor's Balcony
--------------------------------------------------
Fire had completely destroyed the government building three separate times when the capital existed in Jamestown. As a result, people were so concerned with the threat of fire that the new building was built without fireplaces and chimneys. The court generally met in the spring and fall for formal sessions so heat would not be needed. In addition... all fire, candles, and even tobacco use was prohibited to protect Virginia's new Capitol Building. However, the clerk of records began to complain that the dampness in the air was putting paper court files at risk. Two fireplaces were then added to help eliminate moisture inside the building. Within 20 years the building was completely gutted by fire. 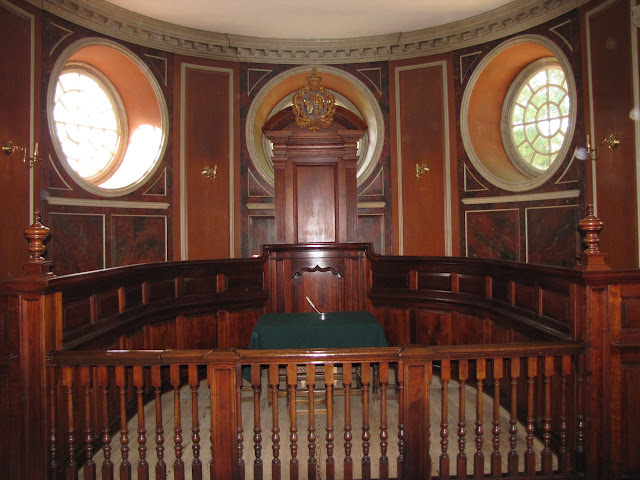 Royal Court Room Paddock
--------------------------------------------------
Moving Virginia's capital to Williamsburg had a major impact on the community formerly known as Middle Plantation. Later moving the capital again to Richmond also had a profound impact on Williamsburg.  As the people, businesses, and money moved west with the government, the community lost a great deal economically. The Capitol Building was rebuilt following the first fire but after the government moved inland to Richmond, the political buildings left behind fell into disrepair and became victims of neglect. Both the Governor's Palace and the rebuilt Capitol Building were laid waste once again by fire and in time, completely disappeared from the landscape. The lost buildings did not reappear until they were reconstructed during the initial building boom funded by the Rockefeller family in the mid 1930s. Today all the buildings in town, including the capitol, have to follow modern building codes, complete with smoke detectors and fire alarms installed!  Progress has its positive side! 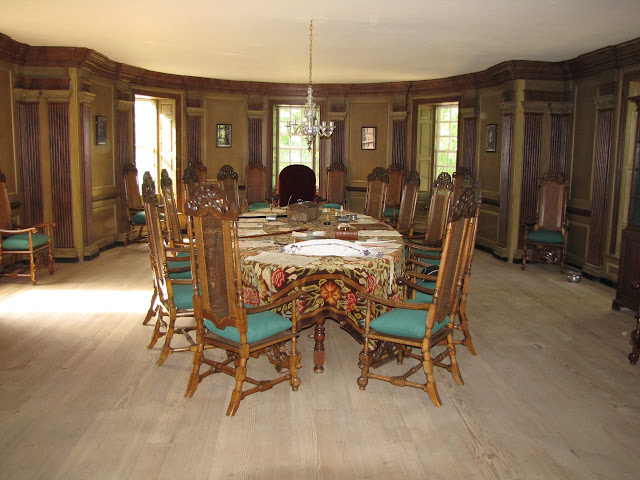 Governor's Meeting Chamber
--------------------------------------------------
The reconstructed building today was beautiful inside, symmetrical and orderly with innate woodwork throughout. One of the committee rooms is shown above where the future of Virginia was debated and new laws decided. The grand building often sat empty much of the year when the legislature was not in session. However, it was often opened for social events such as banquets, parties, and dances. We attended three excellent evening activities at the Capitol Building during the week. One program centered on ballroom dancing, an activity set aside for the gentry class of colonial America. We watched the dances performed by highly trained impersonators and then... yes... we danced with the professionals. Sadly, cameras were prohibited inside the event and evidence of me busting a move with some colonial ladies is lost to history. You will have to use your imagination... but I will tell you... I was poetry in motion! Smooth! 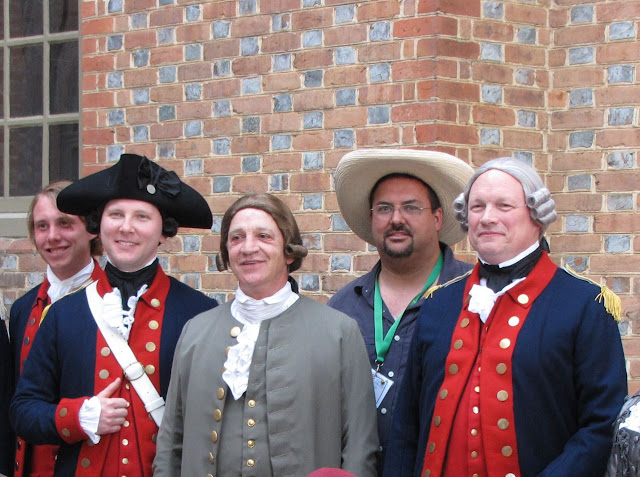 Military Trial Cast Members
--------------------------------------------------
The second evening program was the recreation of an actual military court inquiry during the American Revolution in 1779. An officer was charged with cowardice when he withdrew from his assigned post leaving the town of Portsmouth defenseless. His decision saved the lives of his men but the town was soon easily captured by the British. A young artillery officer disagreed with the commanding officer's decision and protested the unit should have stayed and fought the enemy. The British destroyed 137 American ships anchored in the harbor.  Charges were filed against the actions of the commanding officer and the case was heard in the Capitol Building in Williamsburg. The actors shown above were excellent... minus the guy in the plantation palm hat in the center. He was just a bystander who was in the audience during the trial proceedings and jumped into the picture. The poor guy was obviously starving for attention. It's ok... you can feel sorry for him. 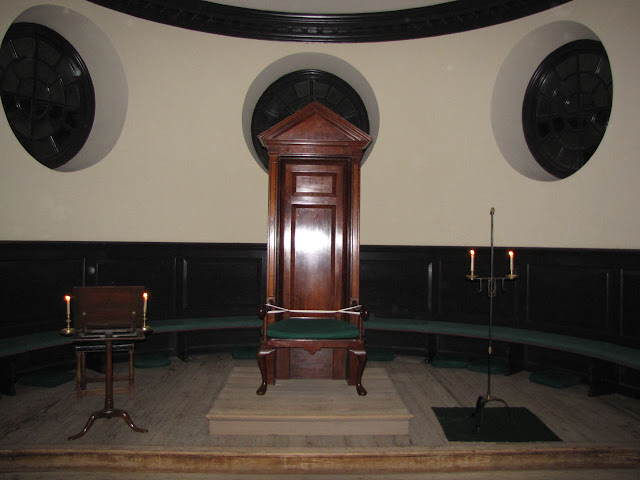 Court Room Judge's Chair
--------------------------------------------------
The trial was carried out by candlelight, which really helped create a historical atmosphere. The case resembled a colonial version of a Judge Judy episode but everyone followed the proper conduct of aristocratic gentlemen with behavior associated with good breeding. Tempers flared but they never broke away from civility and respect for the judge and court. The acting was very convincing and the audience (us) acted as the jury for the case. Our verdict (Not Guilty) matched the actual courts decision. Well done! Justice is/was served. 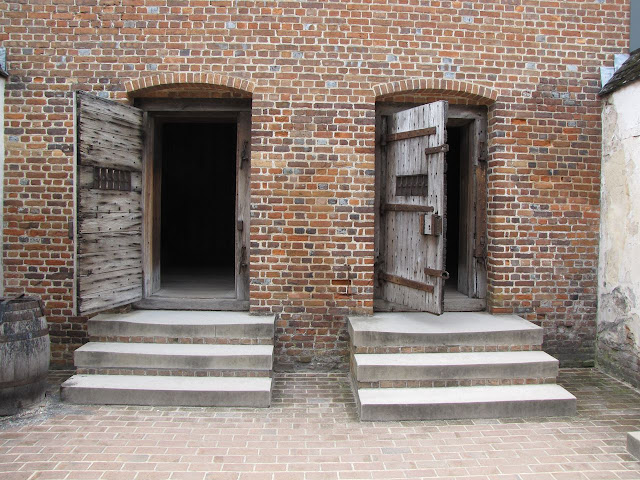 Cell Block Courtyard
--------------------------------------------------
On our final evening program associated with the Capitol Building was a three-stop skit on crime and punishment. I was a little curious why we were warned in advance that some may feel the need to exit the program and should feel free to step out if necessary? We started in the capitol's yard meeting a character named Jack Scratch who was sharpening a knife by firelight. He was one of the magistrate's associates who tracked down suspected criminals and then assisted with carrying out punishments. He was a little dark and intimidating, plus he never broke from character as he described his methods of intimidation when interrogating suspects in search for confessions of the truth. The knife never left his hand during his descriptions and he seemed a little psychotic himself. I was glad to move on to our next stop at the gaol next door leaving Jack Scratch in the shadows of the capitol building's courtyard. 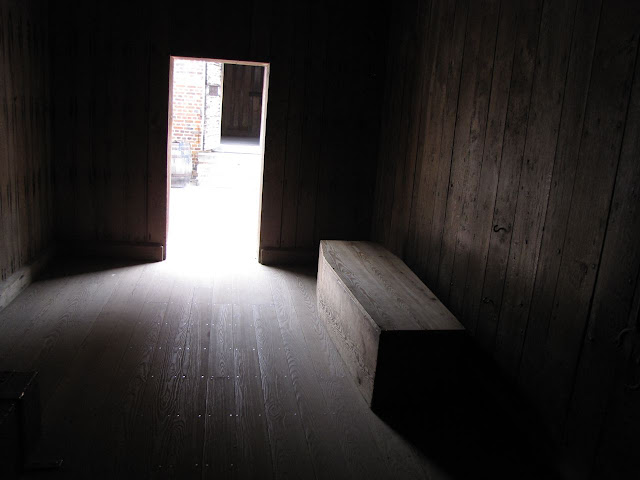 Jail Cell Interior
--------------------------------------------------
Next, we entered the jailhouse parlor where we met another one of the magistrate's creepy helpers who was preparing for a public branding, scheduled for the next morning. He looked like he might have been a former client of the jail and was now an employee. Criminals were branded with different letters depending on the nature of their crimes. He heated up a "T" iron brand (Thief) red hot and then demonstrated the procedure on a piece of leather to simulate the effect on human skin. Many in our group winced as the brand hissed into the leather, burning a permanent marking for all to see. This may be where the saying "A marked man" comes from because this punishment method marked you for life and everyone would always know of your crime. A marked man would have a more difficult time getting employment or acquiring credit. Thankfully, it was time to move on to our final stop at the jail cells where we would soon witness the most disturbing presentation of the evening. 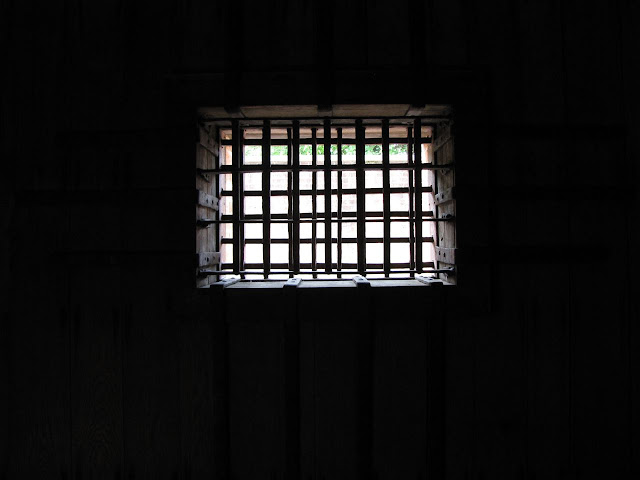 Jail Cell Window
--------------------------------------------------
Our final encounter was to meet an actual woman who was sentenced to death by hanging in Williamsburg long ago. She was executed, hung from the gallows behind the gaol, which we could see outlined in the distance in the moonlight. Although it was June, it was feeling more and more like Halloween. We were meeting her on the evening before her execution and it was an emotionally charged display of hysteria, not something for children. The woman suffered from mental illness and was calling out to her infant daughter that was taken away from her when she lived in England.

Court records indicate she lost her daughter due to her persistent problems with mental illness. Like many in the English prison system, she was deported to America as an indentured servant and wound up trying to harm her master... go figure! Didn't see that one coming! She never acknowledged our presence and it was gut wrenching to watch a person in a state of emotional and physical wreckage. No one left... but some turned away. I was glad to run into the same woman the next day portraying a weaver and seamstress, happy and content in her work! It was a realistic series of presentations and was reserved as an evening program because of the nature of the content. Again, not something I would recommend for children.

Note: Photography was prohibited during all evening performances. However, with the exception of the above two images, all photographs were taken by me personally. 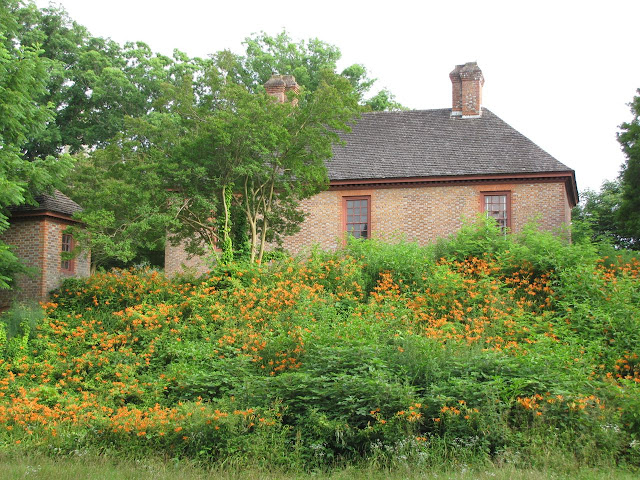