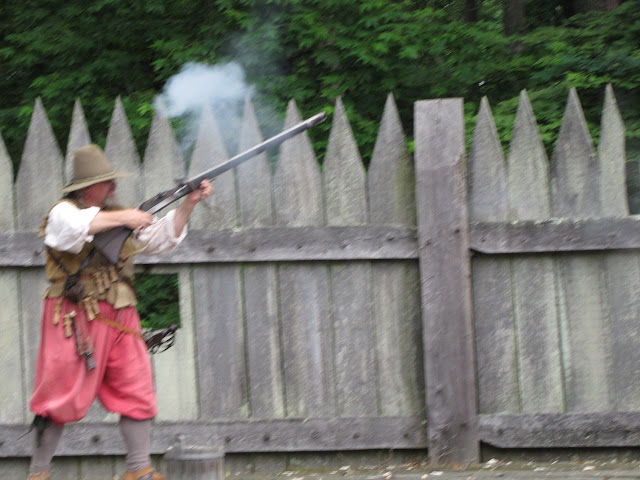 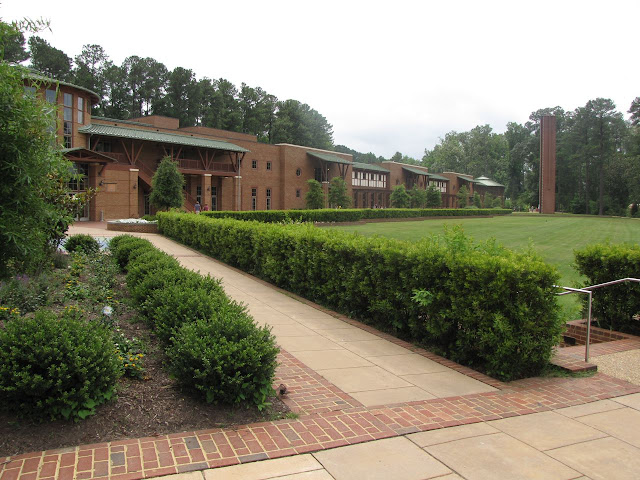 Settlement Visitor's Center
----------------------------------------------
Jamestown Matters... Welcome to history recreated!  Following our visit to the actual Jamestown archeology site, we went up the road to the state of Virginia's version of Jamestown known as Jamestown Settlement.  The campus was designed to increase the public's understanding of Virginia's role in creating America and eventually, the United States.  The first thing you notice is someone pumped a lot of funding into the foundation that is the site's key sponsor.   You enter the site through a gigantic facility that houses education programs, museums, and enough space to do just about anything you wanted.  I've never seen anything like it!  It resembles a hotel lodge in the Adirondack Mountains! Impressive to say the least! 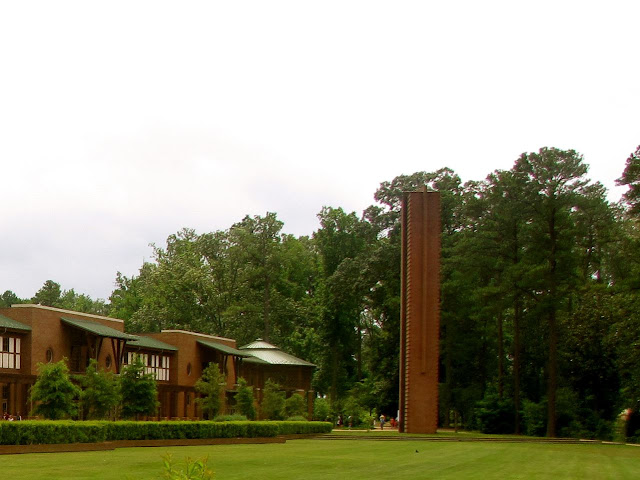 Jamestown Monument
----------------------------------------------
If you look at the close-up photo above you can see the monument built to honor the legacy of the Jamestown settlement behind the colossal visitor's center.  The 1970's were good to colonial history, in the sense that a lot of preservation took place in preparation for the nations Bicentennial Celebration. However, I will never "get" architecture from the 1970's decade because... well, I think it's just downright ugly.  Sorry!  The monument is a tall narrow brick rectangle that must be a hundred feet tall. How a stack of bricks is a tribute to the people of Jamestown is beyond my ability to comprehend art or understand the 70's decade as a whole.  I apologize if I offended your love of 90-degree angles and squared edges in historical representation of the past. 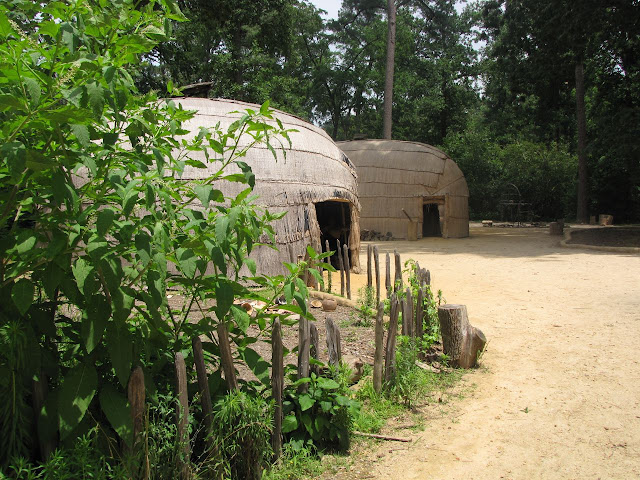 The Algonquian Village
----------------------------------------------
The site is done right... you leave the visitor's center complex and walk back a dirt path to a recreated Algonquian village, which represents the native people of Pocahontas and Chief Powhatan.  The reed wigwams are complete with authentic recreated interiors you can explore.  We sat on deerskin covered benches while our tour guide explained the identity and purpose of the each item inside.   It was history you could examine and experience first hand.  The Native American farming techniques were also on display and their creative approach was interesting to see in live practice.  Corn stalks were planted about five feet apart with beans planted around each base. The corn stalk provided a natural trellis for each bean plant to climb eliminating the need for staking each plant, ingenuity the settlers learned from their New World neighbors during times of peace and trade. 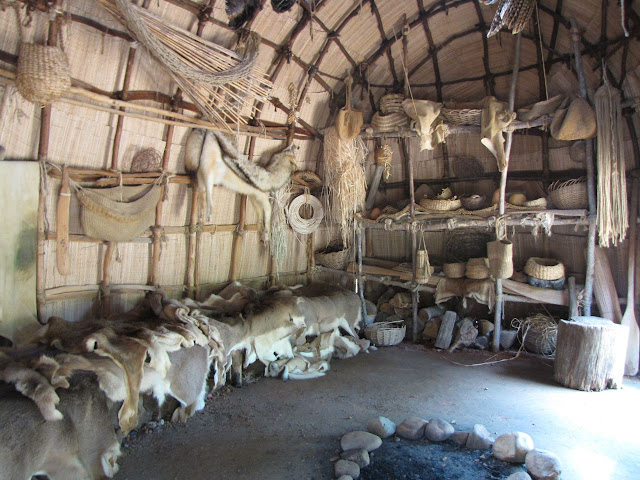 Wigwam Interior View
----------------------------------------------
Next, we passed by the palisade walls of the fort to follow our guide down to the docks on the James River, the lifeline for the Jamestown settlers.  Four ships were docked in port including the reproductions of the three ships that brought the first settlers to the colony in 1609.  The Susan Constant, Godspeed, and Discovery are moored in port for you to board and explore.  We used block and tackle on board the Discovery to lift and load a barrel on deck.  Not as easy as it sounds.  A lot of scientific principles in play that suddenly brought back bad memories of a pulley lab I failed in eighth grade as a student!  However, the process was a success and my fears of a slow death, hanging myself in the rigging soon evaporated. 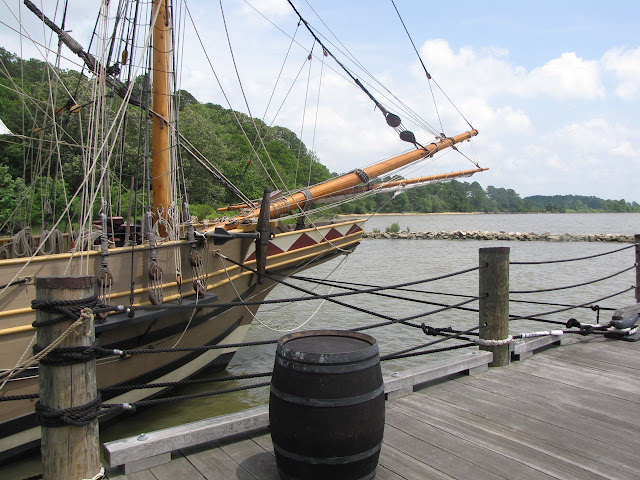 Essential Supply Ships
----------------------------------------------
Just up stream was the Jamestown-Scotland automobile ferry that is considered part of Virginia State Route 31.  The ferry eliminates the need for a large bridge that would diminish the historical atmosphere of both Jamestown sites.  The ferry operates 24 hours a day and is toll free... can you believe it?   Free!  Depending on the time of day, a dozen or more cars can sit and wait about a half hour to board the busy ferry.  Also, although the far eastern shore is occupied by residents, the land in view from the western shore where we were looking out over the James River was free of all private and commercial development.  A sacrifice that helps keeps the historical integrity of both sites intact and keeps the natural beauty of coastal Virginia pristine. 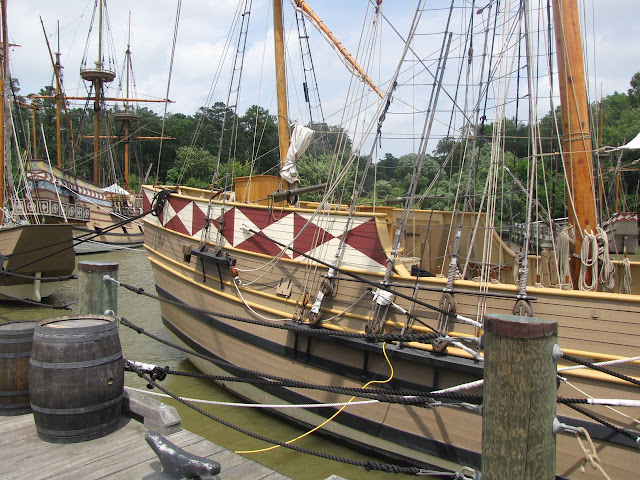 Local Encounter on the Dock
-------------------------------------------------
Incidentally, as I was standing on the dock, I suddenly heard... Mr. Martin! Mr. Martin! yelled out from behind me.  Apparently, a Boy Scout troop from my hometown was visiting Jamestown Settlement that very day during the two hour block of time our group was on site.  What are the odds?  Many were former students who started taking pictures of me like I was a historical artifact on display!  I was glad when the scoutmaster appeared to see what all the commotion was about and herded them back toward interests of history rather than history teachers.  Again... What are the odds?  Now I know the challenge other celebrities (like Brad Pitt) experience when venturing out into the civilian world... You can't go anywhere without the paparazzi pouncing on you at every turn.  I was just hoping I wasn't going to wind up on the cover of the National Enquirer at super market checkouts the world over!  Brad and I should start a support group. 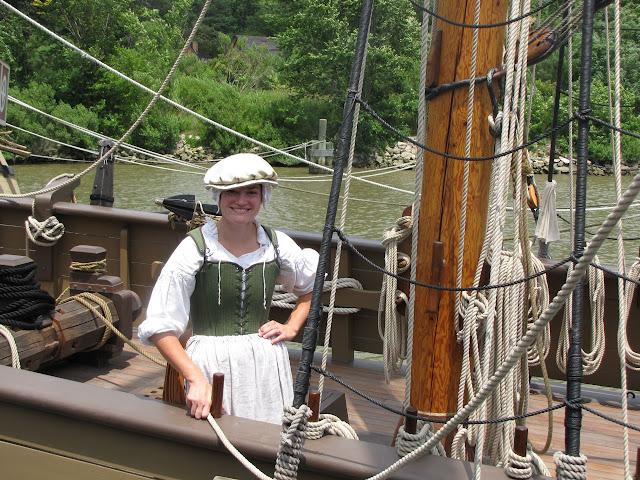 Passenger Aboard the Godspeed
----------------------------------------------
The triangular shaped fort is recreated as a military and trade facility circa 1612 with many wattle-and-daub structures from the time period.  There were military barracks, storehouses, the governor's modest residence, and an Anglican Church to explore.  The saving grace for Jamestown was a weed cultivated by the Indians called tobacco.  With the help of Sir Walter Raleigh's pipe smoking at major social events, it became instantly popular with the wealthy throughout Europe.   Maybe the settlers of Jamestown couldn't find actual gold but soon tobacco was in such demand it became known as green gold. 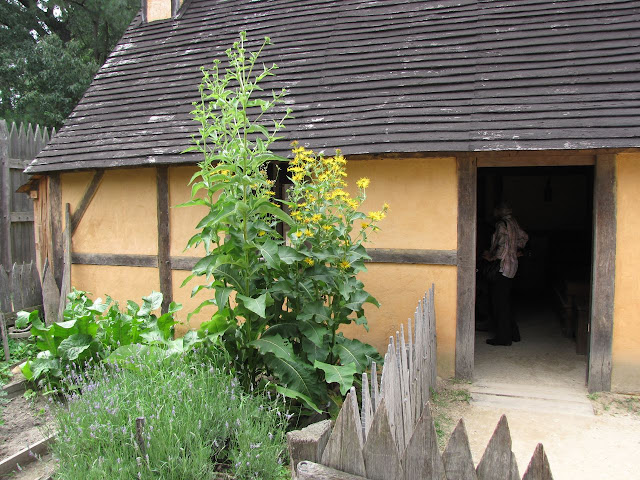 Soldier's Barracks
----------------------------------------------
Jamestown couldn't clear land fast enough to grow what the Native Americans called the stinking weed and even plowed up the few short roads and any open space as make shift fields.  Later the future English husband of Pocahontas, John Rolfe, experimented with seeds from the Spanish Caribbean islands with promising results.  Improvements in cultivation and curing of the product improved the crop's yield and profits.  The major problem with tobacco was that it was the only cash crop or profitable commodity Jamestown had to offer.  The financial success and failure of Jamestown followed the up and down swing of the tobacco market.  Plus, tobacco quickly depleted the soil, robbing the earth of nutrients like no other plant on earth.  Most tobacco fields were void of any productivity within a few years.   "Green Gold" laid waste to the land and even corn could not be grown in the barren soil for up to a decade or more.   As a result, more and more virgin land was cleared for tobacco and western expansion into the interior began along with accompanying conflicts with Native Americas. 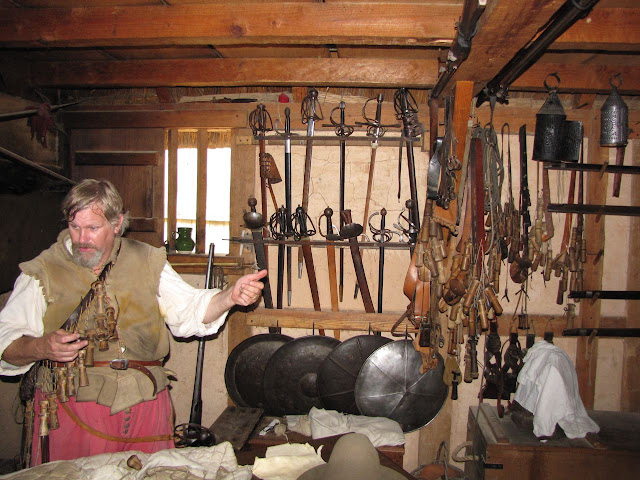 Arms and Armor Stores
----------------------------------------------
Indian problems became the focal point of Jamestown's future and eventually was the cause of the community’s complete demise.  The settlement was attacked in 1622 where 347 settlers were killed, over one fourth of the entire population.   But surprisingly, the final blow to Jamestown would come from an internal enemy, upset over the government’s inability to protect the western settlers from Indian attacks.  Enter Nathanial Bacon, a man who would butt heads with the colony's governor William Berkley more than once.  Upset with Governor Berkley's inaction concerning Indian attacks in the west, Bacon formed his own vigilante army and took matters into his own hands attacking local tribes.  He later arrived in Jamestown, driving the governor out of town.   He then burned Jamestown to the ground destroying the capital of Virginia.  America's first eastern terrorist or western savior was now on the run from colonial authorities but he suddenly died of natural causes and the rebellion fell apart.   Governor Berkley then returned to hunt down, arrest, and execute over 20 of Bacon's followers but the damage was done.  Berkley was recalled by the crown and open elections were held for the first time in fifteen years giving the west the chance to be heard. 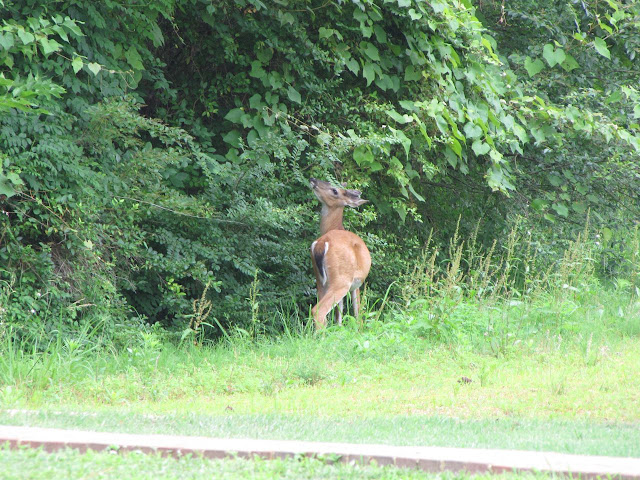 Venison / It's Whats for Dinner
--------------------------------------------------
Jamestown's location had never been ideal and with improved cannon technology it was no longer safe from foreign enemies.  The decision was made to abandon the ashes of Jamestown and move the capital inland to the new location of Middle Plantation in 1676.  The new site was latter dubbed Williamsburg and the rest is history.  However, Jamestown really does matter because although it struggled and eventually failed, it enabled the English to gain a permanent presence in North America much to the benefit of the English Crown and the dismay of the native people who were already here.  This is where the history of the United States of America really first began. 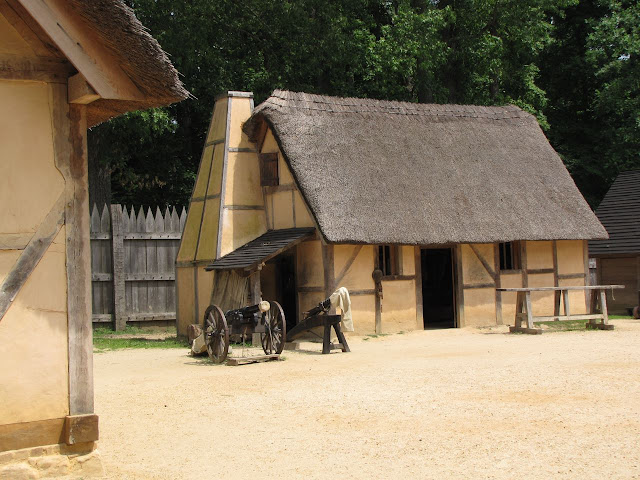 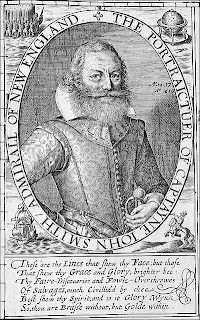