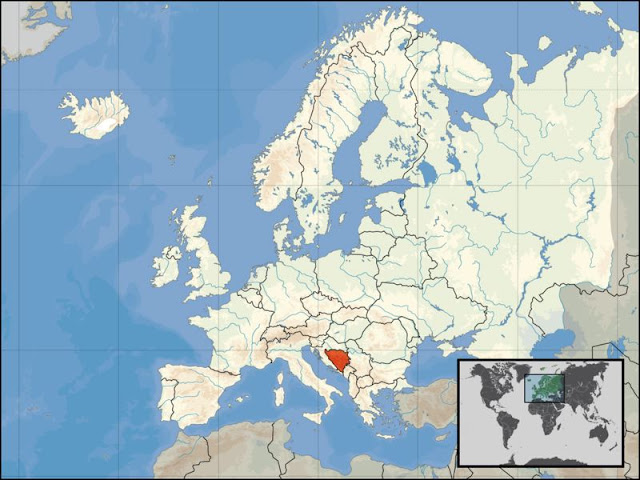 The Old Country / Homeland
------------------------------------------------
Katelyn and I were soon about to travel to New York City for a "father daughter" day trip touring the Big Apple. I really wanted to visit Ellis Island where my grandfather, Stephen Emich, entered the country in 1921 at the age of ten. He was originally from a small village called Bastaji in a section of Eastern Europe that would be called the Bosnia and Serbia region today. The area was full of ethnic tensions and may be the reason why the family decided to emigrate to America. His father, Adam Sr (my great-great grandfather) came to America alone first... to get a job, find housing, and then save enough money to pay the cost of passage for his family to come join him in the United States. 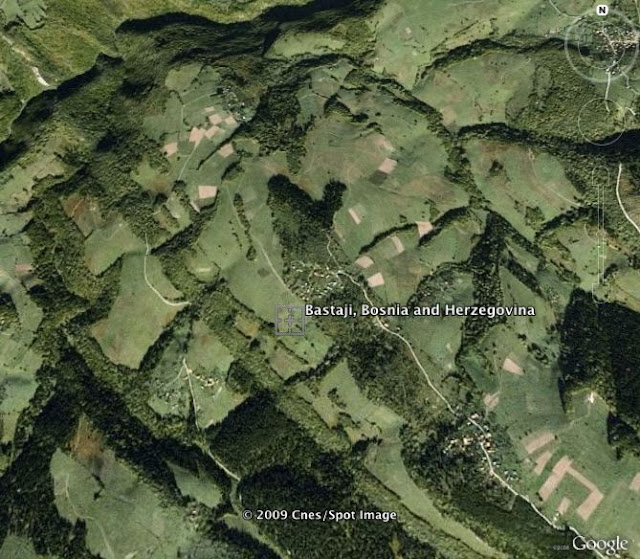 Village of Bastaji Map
------------------------------------------------
Adam Emich found a sponsor near Pittsburgh and soon made his way to Lancaster where he found employment in construction and a place to live in the German section of Lancaster City known as Cabbage Hill. He was ready to send for his wife and family back in the Old Country but world events would decide otherwise. A Serbian national assassinated the archduke of Austria which sparked World War I and communication between Adam and his family ceased for the four long years of the war. Following Armistice Day that ended the violent conflict, there was still no word from his wife and children. He traveled back to Austria-Hungary (Yugoslavia) to try and find his family. He soon discovered his wife had died from tuberculosis during the war and the new location and welfare of his two sons remained unknown. 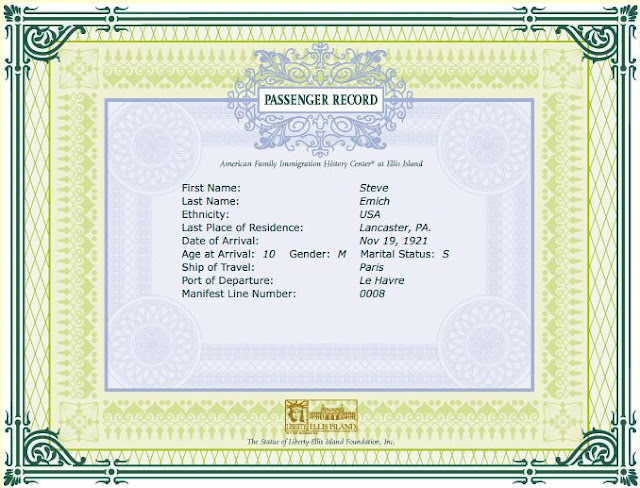 S.S. Paris Passenger Record
------------------------------------------------
He soon found the two boys, Adam Jr. now sixteen and Stephen now ten years of age, living in a barn on a nearby farm and herding a flock of sheep as shepherds to earn their keep. Reunited for a short time, Adam made his way alone, back to the coast to arrange for his sons' passage to the New World. Next, he returned to America to make the arrangements and apply for permits and legal rights for his sons' entrance into the country. In time, the two boys received instructions and made their way west to France where a ship called the S.S. Paris was preparing for its maiden voyage to New York City. 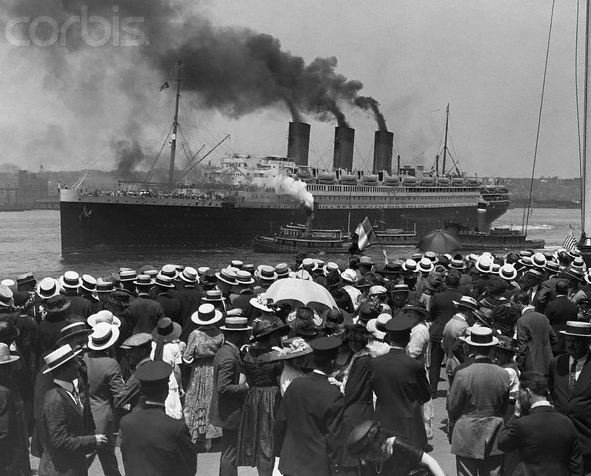 S.S. Paris Arrival N.Y.C.
------------------------------------------------
In late September of 1921, the S.S. Paris departed the port city of Le Havre, France on its maiden transatlantic voyage to New York City. Adam Jr. and Steven were among the 1,953 passengers on board, in third class status. The ship arrived in New York Harbor on November 19, 1921. The ship's arrival is documented in the rare photograph pictured above where families have gathered to greet their loved ones arriving on the new ship. It is a special image to have, knowing this is the exact voyage my grandfather was on and he may be one of those passengers seen on the distant deck. 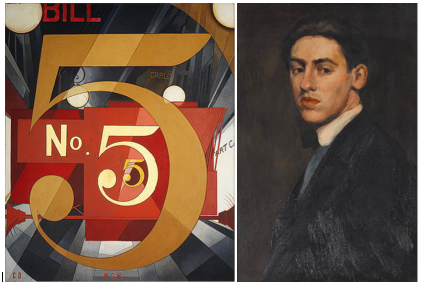 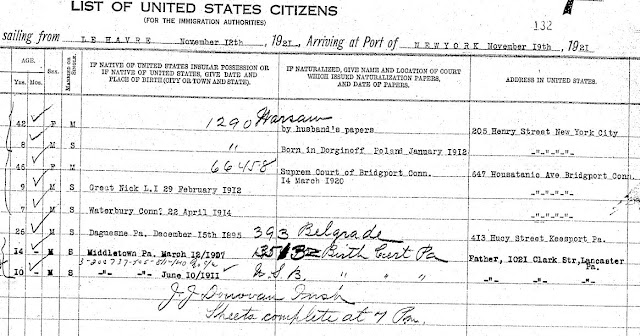 Ellis Island Processing Sheet
------------------------------------------------
After all passengers exited the S.S. Paris, the undocumented were transported to Ellis Island for processing where individuals and families navigated through a series of check points to see if they were fit to enter the country. Adam Jr. and Stephen arrived at the island in the evening and are listed on the daily manifest at the bottom of the page as entries seven and eight logged in at 7:00 PM, as seen above. As a result, they stayed the night in the dormitory on the grounds and were then ferried to the train station on the New Jersey side the next morning. From there, they made their way toward their new home. 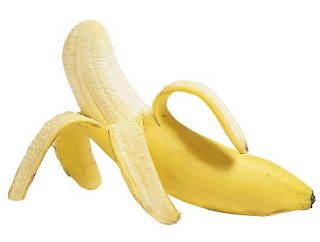 First Banana Encounter
------------------------------------------------
One story of interest I remember hearing was an example of the sudden culture shock many came face to face with on the island. At the meal provided on the island, my grandfather sat down with hundreds of other new immigrants in the vast dining hall that could serve 1,000 people at a time. They were served bananas with the meal and no one at his table had ever seen such a thing and had no idea how to eat it. The logical thing to do was follow the routine associated with other fruits. They pealed the banana, ate the skin and let the large white seed or pit on the plate! If you think about it, bananas are one of the few fruits where we eat the seed. So my guess is, they were probably not too impressed with the taste of this new exotic fruit and probably were a little weary of trying new cuisines in America after that! 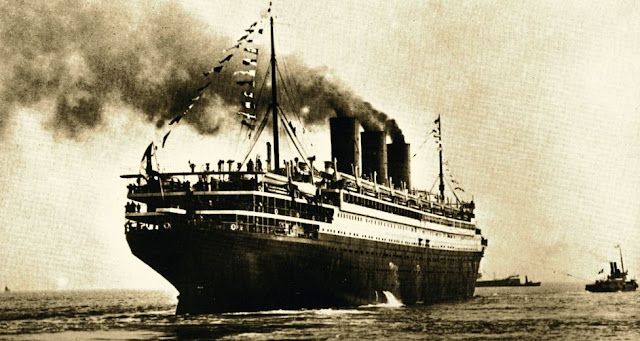 The S.S. Paris Departs N.Y. Harbor
----------------------------------------------------------
The brothers arrived in Lancaster by rail and then began their lives in the New World. The brothers took two different paths in life with Adam going right to work at Armstrong Industries, where he would work the rest of his life on the plant floor. Adam never assimilated to America very much. He lived his whole life in the German speaking area of Cabbage Hill. He never learned to read and write and the lack of an education somewhat limited his opportunities in life. Cabbage Hill offered a home away from home where the residents of German decent could retain their Old World customs and culture. 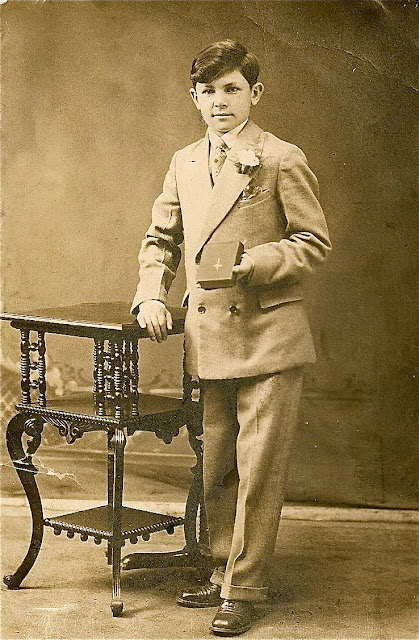 Stephen Emich Confirmation
------------------------------------------------
Stephen, pictured above at his church confirmation, attended public school at Manheim Township School District for several years where he learned to speak the language well. He continued his education until the school building was destroyed by fire. He then followed in his older brother's footsteps to Armstrong where he also would be employed for the rest of his life. However, with his ability to read and write, more doors were open to him and he was promoted off the plant floor and became part of the office personnel. 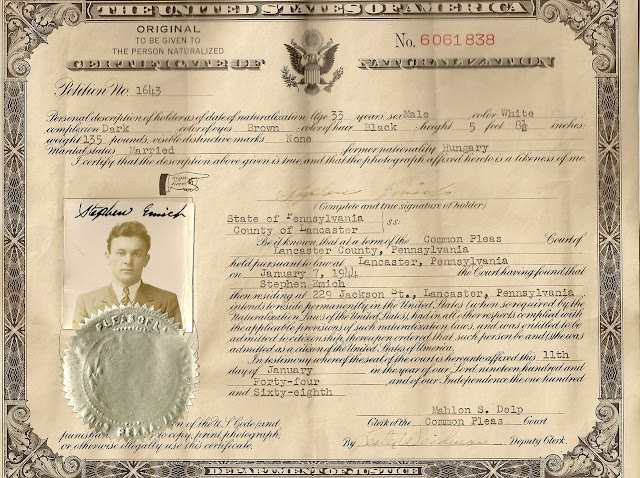 Certificate of Naturalization
------------------------------------------------
Stephen grew up, got married and raised a family of his own on Jackson Street right behind the Armstrong Plant in Lancaster city. He had two daughters, my mother being one of them. Above is an image of my mother's most prized and cherished possession, her father's naturalization certificate. He died of a heart attack at work in 1969 when I was just a toddler. My mother and I visited Ellis Island soon after the Main Hall was restored in 1990 and opened as a museum to the public. Since that time, they have erected an Immigrant Wall of Honor where you can pay to have a name added to the monument. The following Christmas, I had his name placed on the wall and received a certificate for my contribution. I had it framed and gave it to my mother as a surprise gift on Christmas morning. That was over fifteen years ago and I have never seen his name on the monument. Katelyn and I were on a mission to make a journey of own own to seek out and find it. 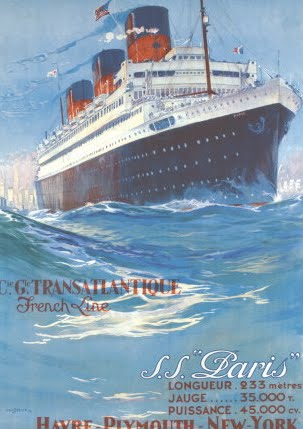