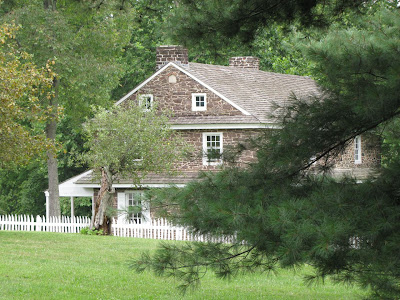 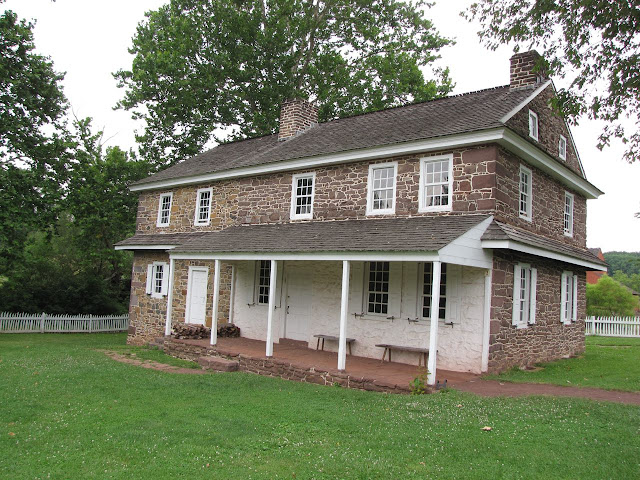 The Expanded Homestead
---------------------------------------------
Ok, time for another journey, time to check out one of those brown and white historical site signs along the Pennsylvania Turnpike that I have passed many times but never took the time to visit. Well today was the day! My trusty sidekick Katelyn was game for another journey back in time to preserved history. Tyler on the other hand, has recently discovered the virtual world online and now seems to have no need to have physical contact with the outside real world. Oh well, I can't compete with online gaming but at least Katelyn was willing to humor the old man, so we pushed on to our next adventure. The Daniel Boone Homestead was on the agenda and Katelyn and I ventured out into the natural world in real time! Onward! 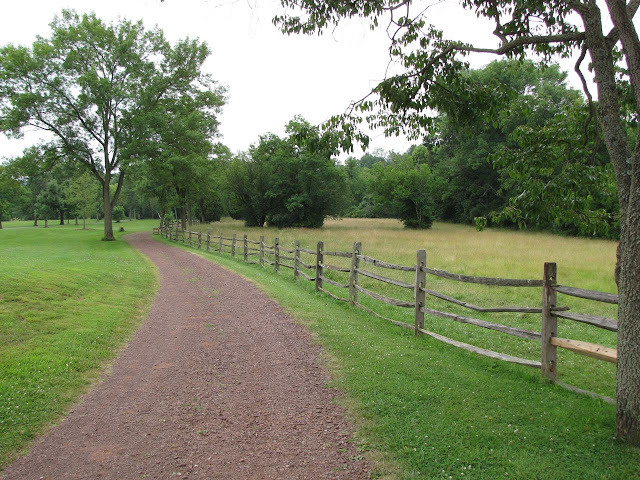 Homestead Farm Road
---------------------------------------------
Daniel Boone's legacy has become a mixture of fact and legend ever since he became the face of the American frontier and pioneering spirit. The subject of countless books, movies, television shows, radio programming, and now the internet has distorted the line between Hollywood and history. One thing is for sure; Daniel Boone's personality did capture the restless American characteristic of the never ending quest to explore the unknown. Like many Americans of the period, he was constantly on the move, relocating time and time again, seeking to see what had previously never been seen. Within his lifetime he spent part of his life in Pennsylvania, North Carolina, Virginia, Florida, Kentucky, and Missouri just to name the places he settled down, at least for a short time period. He explored far beyond the known world, penetrating deep into the expansive western wilderness. 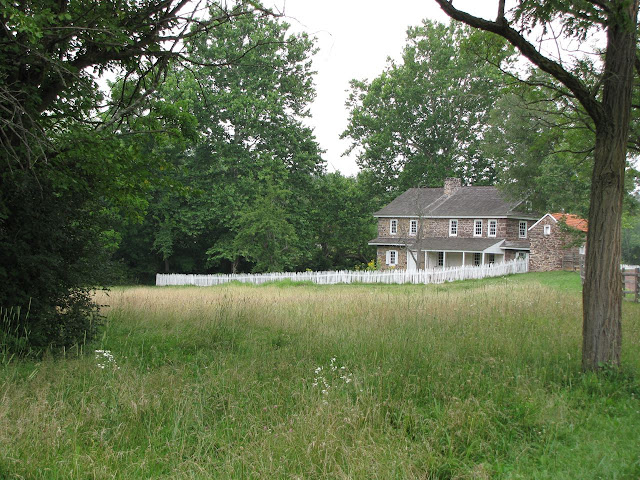 White Washed Picket Fence
------------------------------------------------
The Daniel Boone Homestead is a well preserved site with over 550 acres surrounding and shrouding the history from the modern world. I don't know about you, but the sight of a McDonalds, a super highway, or Walmart across the street just ruins it for me. The grounds are spread out, peaceful and quiet except for the sounds of nature. However, Daniel Boone never actually lived or worked in any of the present buildings. He spent the first 16 years of his life here but none of these solid structures existed when he wandered through the surrounding woods as a young man. Like many original colonial era home sites, the buildings were constantly improved and expanded within the original foundation. All that remains of the original log home where Daniel Boone was born is the foundation and root cellar beneath the main house. 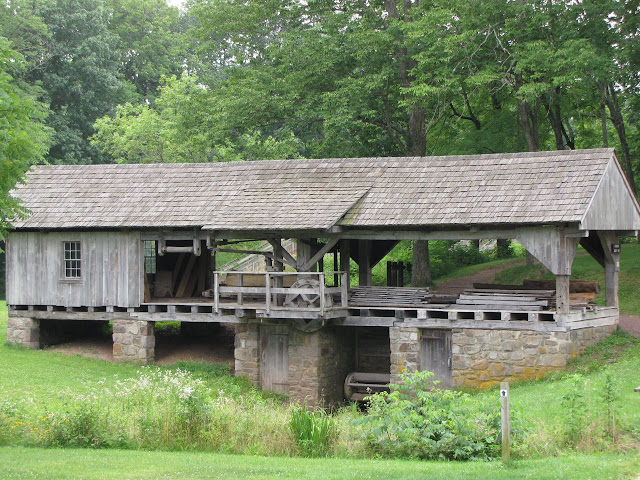 Oley Valley Sawmill
---------------------------------------------
I was particularly interested to see the sawmill located close to what today is called Daniel Boone Lake down the lane from the Boone House. The Bertolet saw mill was built in the early 1800's but was not original to the site. It was relocated here in the early 1970's from nearby Oley Valley to preserve it and make it accessible to history seekers like myself! One of my ancestors, Elisha Martin owned and operated a similar sawmill during the 1850's outside Terre Hill, Pennsylvania which was reclaimed by Mother Nature many years ago. Like the Bertolet mill, it was powered by a waterwheel connected to a nearby water source. Clean, green, renewable energy! Amazing how we come back to the technology of our ancestors to find solutions in the modern world. These guys knew what they were doing! Stewards of Mother Earth! 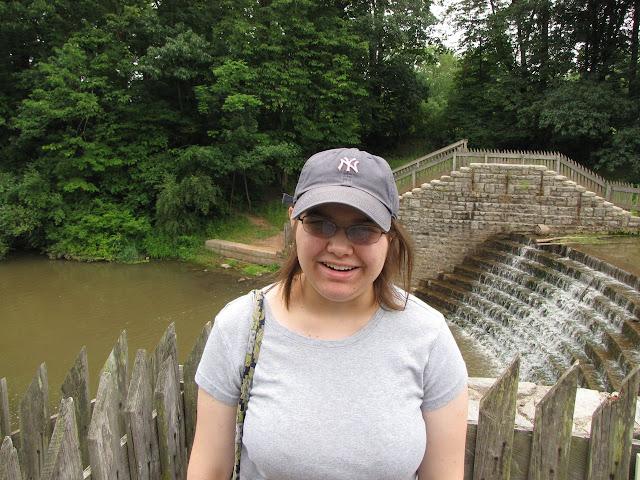 Katelyn / Daniel Boone Lake
---------------------------------------------
Hey kids, put on a happy face! Remember, it's always a fun time when you are learning about your heritage! It's really fun for the whole family! Anyway... there was lots to explore and behind the sawmill was Daniel Boone Lake, which Katelyn liked best, The modern dam was designed to have a gentle cascading waterfall flow over the top adding to the serenity of the scenery. We then went across the bridge to see the Wayside Lodge that was built for group meetings and sleepovers on the site. Although built in the 1940's, the design of the building fit in seamlessly within the colonial time period and was in itself, a nice photo op. 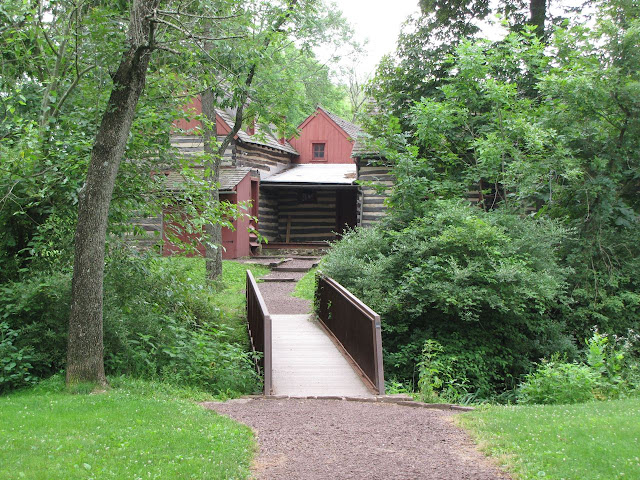 Bridge to Boone Lodge
---------------------------------------------
Overall it was a great place to visit. I am always very conscious of the absence of modern sounds within well-preserved properties like the Daniel Boone Homestead. It takes you back to a simpler time when there was a lot more peace at quiet in the world. Something we could all use a little more of from time to time. Daniel Boone had an extraordinary life that impacted multiple peoples and settlements throughout colonial history. This is the place where it all began, a poor farm boy who went on to become a household name throughout North America and much of Europe. Again, the Power of Place... 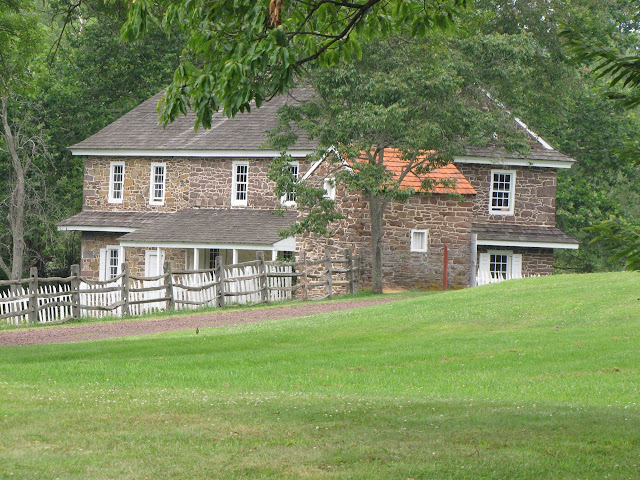 The Homestead comes to life often during the year
with special calendar events and presentations.

Posted by Camp Martin Travels at 5:36 AM